"Kid's Cove" is a children's play area currently under construction at the Knoxville Zoo. Covering more than 3 acres and costing $3 million plus, "Kid's Cove" is a child size version of our own Cades Cove in the Great Smokey Mountains National Park. Here children can explore, learn, play and experience what life was like in the cove during the 1800s. There's cabins, barns, vegetable gardens and water falls as well as a rock climbing wall and a giant sandbox for children to play in. ISI's Draincore2 was chosen as the drainage layer to be installed under the giant sandbox, and when we say giant, we mean GIANT! "Kid's Cove" is a place where children will be able to pretend they're farmers, zoo keepers or even the little animals they interact with. The Knoxville Zoo is planning to open "Kid's Cove" in late summer 2004. Check back soon for more pictures of the Giant sandbox at Kid's Cove! 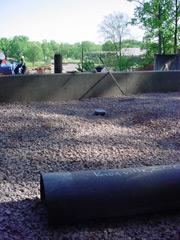 A structural base goes underneath the fabric , then the Draincore2 will be placed. 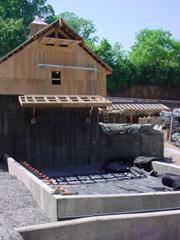 A wide shot of the “Kid’s Cove” giant sandbox under construction. 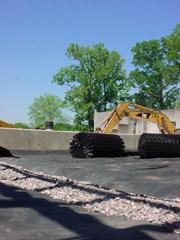